The natural history of Arcata’s Community Forest is redwood-dominant forestland. Prior to European settlement, Arcata’s forestlands were used for hunting, fishing, and other uses by nearby Wiyot Native American settlements. Wiyot villages were settled adjacent to Arcata’s forest and throughout the vicinity of Humboldt Bay. When Europeans began to settle in the Humboldt Bay region in the 1850’s, native Wiyots were soon driven off their lands.

Lands within Arcata’s Community Forest were claimed through land patents and the initial logging began. Much of Arcata’s Community Forest was logged during the 1880’s. Trees were felled with axes, wedges, and crosscut saws. Large trees with defects and many smaller diameter trees were left following logging although they were usually consumed in the slash fires, which regularly occurred. No attempt was made to replant.

Following the logging of the Arcata’s Community Forest, the area was used for grazing and for water supply. It was not until the 1930 through the1940’s that the citizens of Arcata gained title to the Community Forest for the purpose of providing water to the town (Van Kirk 1985). By 1955, the Community Forest was dedicated as the first municipally-owned forest in the State of California, and was to be “managed for the benefit of all citizens of the city, with attention to watershed, recreation, timber management, and other values” (Humboldt Times, May 15, 1955). By 1979, a voter approved Multiple Use Management Plan initiative was passed by Arcata citizens, which led the direction of the forest characteristics seen in Arcata’s forests today.


Click below to watch a five minute video partnering stunning videography with a history of the Arcata Community Forest. 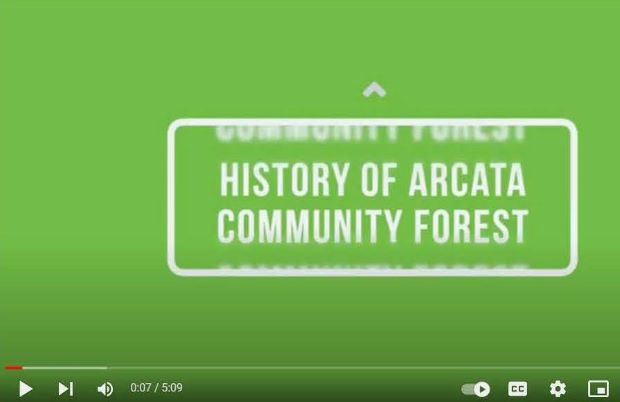